Cimetidine (Tagamet) is a commonly prescribed medication in the US. It’s a type of medication called a histamine-2 receptor antagonist (H2RA) and is prescribed to treat a number of different digestive system issues. The main thing that these issues have in common is a negative response to the very acidic contents of your stomach. While this acid is great for digesting food, it can be very damaging if it gets anywhere it shouldn’t be.

How Does Cimetidine Work? 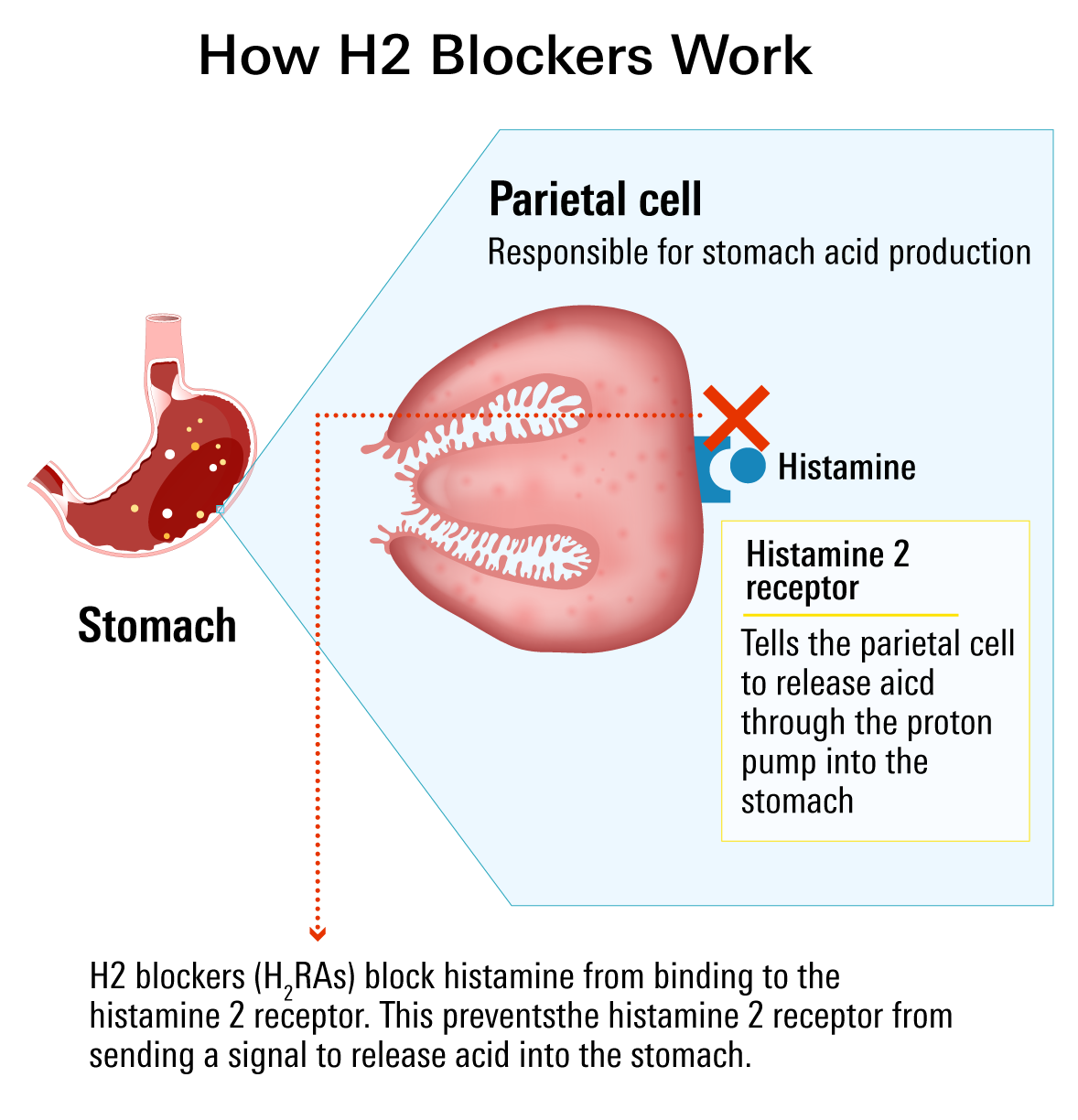 Cimetidine is a medication called a histamine-2 receptor antagonist (H2RA). These medications work to decrease the amount of acid that your stomach makes. For the treatment of erosive esophagitis and ulcers, removing some of the stomach acid allows the damaged tissue to heal without continued irritation from stomach acid. Since hypersecretory conditions are characterized by too much acid being produced, blocking some of this acid brings your baseline back to normal and prevents damage from occurring.

In the regular system, a chemical called histamine comes and binds to receptors on special stomach cells. Once histamine binds, there is a signal sent to a pump that then releases acid into the stomach. H2RAs bind to this same receptor on these special cells. However, instead of sending a signal, they block anything from happening. By occupying and blocking this receptor, they are able to stop histamine from binding and this stops acid from being released.

Common Side Effects of Cimetidine

Every patient responds slightly differently to every medication, so you may experience none, some, or all of the possible side effects. Make sure to talk to your healthcare provider if you experience any changes while taking cimetidine.

Who Should Not Take Cimetidine?

Patients on other medications:

Cimetidine can change the way that certain medications work in your body. This can be non-significant, or potentially dangerous depending on the medication.

This is not an exhaustive list, so make sure to speak with your healthcare provider about all prescription and over the counter medications, natural health products, and supplements you take.

Cimetidine crosses into the fetus’ body from the pregnant mother’s blood. Studies with animals have not shown this to be dangerous to the fetus, but there haven’t been many studies in humans due to possible safety risks to the mother and fetus. As a precaution, it’s recommended to avoid cimetidine while pregnant.

If you’re taking cimetidine and find out you are pregnant, speak with your healthcare provider about the possible risks vs. benefits of staying on this medication.

What is the Right Dose of Cimetidine?

This is a question best suited for your healthcare provider. Cimetidine comes in 200 mg, 300 mg, 400 mg, and 800 mg tablets. The dosing can vary significantly depending on which condition cimetidine has been prescribed to treat. For GERD, the typical dosing is 1600 mg daily, divided into either two 800 mg doses or four 400 mg doses per day for up to 12 weeks. However, for duodenal ulcer maintenance this dose can be as low as 400mg once daily. Because of this range, it’s very important to listen to the exact dosage instructions given to you by your healthcare provider.

How Do I Take Cimetidine?

Whether you take cimetidine one time or four times daily, it’s important to be consistent with the time(s) you take it every day. This is to make sure there is a consistent amount in your body at all times and the medication can work as well as possible. You should take cimetidine with or without food as directed by your healthcare provider. Do not take cimetidine at the same time as any antacids. If you forget a dose of cimetidine, take the medication as soon as you remember. If it’s close to the time you take your next dose, just skip the missed medication; do not take two doses at one time.

The Difference Between Cimetidine and OTC Tagamet

There is also an over the counter (OTC) version of cimetidine called “Tagamet HB 200”. Prescription cimetidine and Tagamet have the same active ingredient, cimetidine, but are used for different purposes. OTC Tagamet is used to prevent or treat heartburn. OTC Tagamet is dosed as one 200 mg tablet taken 30 minutes before or any time after a meal that causes heartburn. It’s a single dose, unlike the prescription medication which is multiple doses daily for a longer period of time.

It's important to note that while OTC Tagamet is readily accessible to the public, it has the same possible side effects and interactions as prescription cimetidine. Because of this, it’s important to tell your healthcare provider if have taken/are finding yourself taking OTC Tagamet often.

How Can I Save Money on Cimetidine?

The cost of cimetidine at your local pharmacy can vary greatly depending on the strength and frequency of your dosage. A dosage of one 400 mg tablet per day for 30 days would cost anywhere from $17–$96.

At Marley Drug, that same dosage of one 400 mg tablet for 30 days is only $8.61 (1 tab/day) That is over 5x less expensive! We are able to offer these lower prices by cutting out the insurance “middle-men”. Insurance companies typically negotiate with drug wholesale companies to hike up the costs of medications. By cutting out the insurance and getting the medications directly from the accredited wholesalers, we are able to lower our costs to be competitive with even the best insurance companies.

If you have any questions about cimetidine or about ordering cimetidine from Marley Drug, one of our pharmacists would be happy to answer them. Just call us at 1-800-810-7790.

Prices mentioned in this article are based on average retail price at major box chain pharmacy in the U.S. as of July 13, 2022