Kyle Brown is the past president of the Winnipeg local chapter of Crohn’s and Colitis Canada and has been living with Crohn’s Disease for 25 years.

What is Inflammatory Bowel Disease?

Inflammatory Bowel Disease, or IBD, is a chronic condition caused by inflammation of the digestive system. IBD usually manifests in one of three different ways:

These diseases can develop in people of any age (including very young children and the elderly), but initial diagnosis is most common in people between the ages of 15 and 45. Patients with IBD can experience a variety of different symptoms; however, these symptoms are very similar between the different presentations of disease. They include:

What causes IBD is still unknown, but many different theories have been proposed including genetic predisposition (family history), microbial exposure (infection by certain bacteria or viruses) and different environmental factors (like substances you may ingest or be exposed to). What we do know is that the frequency of these diseases has increased significantly over the last 75 years, particularly in highly-developed first-world countries, suggesting that some part of our modern lifestyles may be responsible.

Crohn’s disease was first described in 1932 by Dr. Burrill Crohn (in collaboration with his colleagues Dr. Leon Ginzberg, and Dr. Gordon D. Oppenheimer) while working out of Mount Sinai Hospital in New York. Crohn’s disease can affect any part of the gastrointestinal tract (from mouth to anus) and is characterized by inflammation that persists in all layers of the intestinal walls (from inner to outer lining). Additionally, inflamed areas are usually interspersed with healthy regions, giving a patchy appearance known as “skip lesions”. As the disease affects all parts of the gastrointestinal tract, it does have some unique symptoms that differ from ulcerative colitis (like mouth ulcers) and is also more limited in terms of surgical options (i.e., you can’t just remove the diseased areas and permanently cure it). Crohn’s disease most commonly occurs in the last part of the small intestine (known as the ileum) and in the large intestine, or colon. 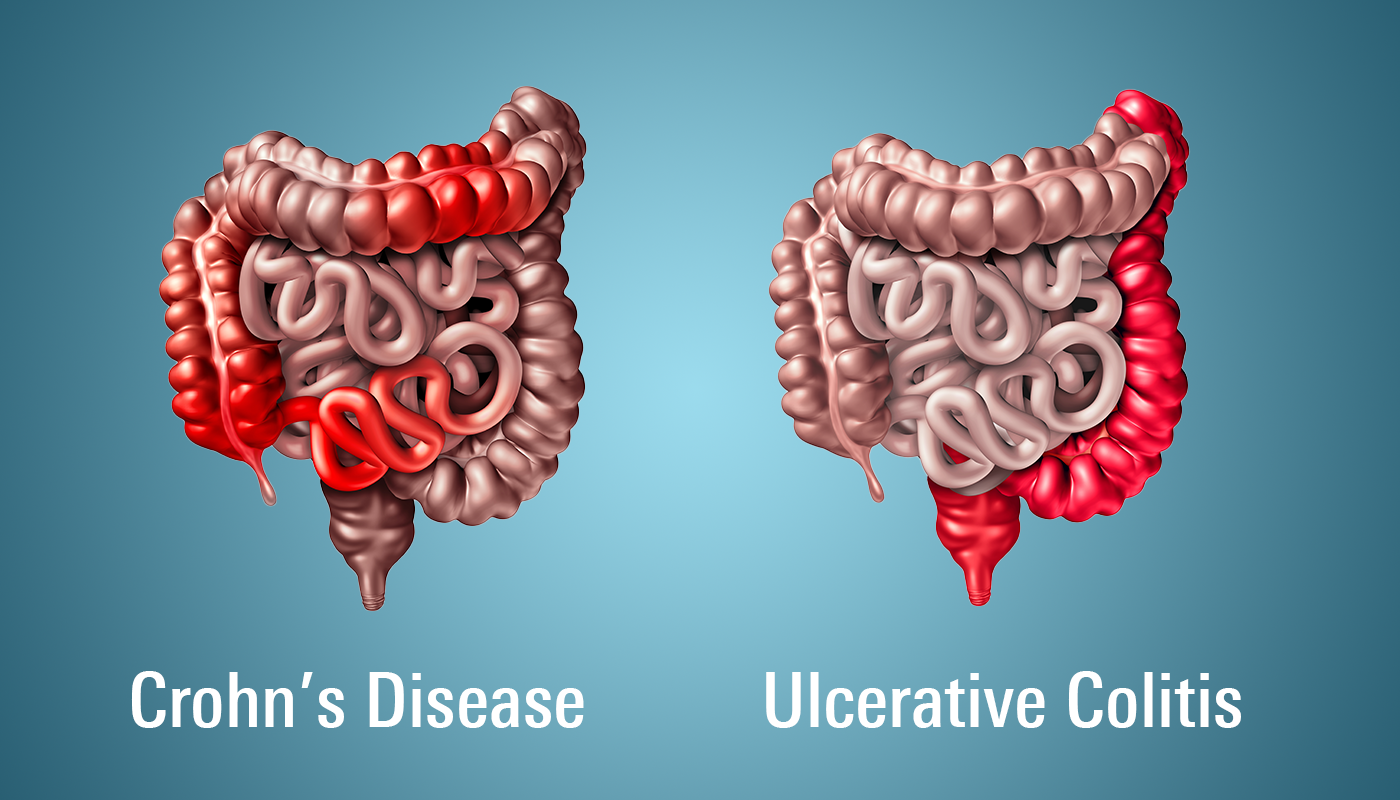 Ulcerative colitis was first identified even earlier than Crohn’s disease, having been initially characterized in 1859 by two English physicians by the names of Dr. Samuel Wilks and Dr. Walter Moxon. Unlike Crohn’s disease, the inflammation caused in ulcerative colitis is entirely localized to the colon. Additionally, inflammation only occurs in the top inner layer of the colon but is present throughout its entire length rather than presenting as small lesions. As the disease is more localized, surgical removal of the colon (a colectomy) can mostly “cure” the disease; however, inflammation can still occur in the rectum/anus if left intact. To avoid this, physicians may elect to divert the small intestine outside of the abdomen with the patient wearing a pouch to catch waste/stool (an ileostomy) rather than reconnecting the small intestine to the rectum.

Unfortunately, there is currently no cure for IBD (other than the surgical option described above for ulcerative colitis). Therefore, treatment can be challenging and generally involves a multifactorial approach including:

The goal of treatment is to switch a patient from experiencing active, symptomatic inflammation (commonly referred to as a “flare”), to a state where inflammation is reduced, and the patient no longer experiences painful symptoms (often referred to as “remission”). This process is cyclical, meaning that a patient generally alternates between periods of flare and remission; therefore, the goal is to keep a patient in a state of remission for as long as possible and changing therapy only once they begin to slip into a flare.

Many patients with IBD find that certain foods will trigger inflammation and pain after eating them. Common culprits include vegetables (particularly raw), dairy products (particularly those with lactose), spicy foods, and food items containing gluten.

Unfortunately, every IBD patient is different and what works for one (e.g., going gluten-free) may have no effect on another. Often, patients in a flare will switch to diets that are easy to digest, such as plain white rice, bananas, applesauce, plain cooked chicken, or meal replacement shakes until they get their symptoms under control.

Common nutritional deficiencies include iron, calcium, magnesium, zinc, B vitamins (B12, B9 and B6), and vitamin D. Supplementation may be done orally, by subcutaneous injection, or intravenously if a patient’s levels are dangerously low.

Very few medications exist that can specifically target the intestinal inflammation that exists with both Crohn’s disease and ulcerative colitis. Therefore, physicians most often prescribe therapies that can either reduce inflammation, block/suppress the immune system, or both. These drugs are broken down into 3 different categories:

A step-wise approach is frequency taken, where patients are first started on anti-inflammatories, moved to immunomodulators and finally to biologics if they don’t achieve success with any of the initial treatments.

The most common anti-inflammatory medications are corticosteroids (like prednisone) and 5-aminosalicylic acid medications (5-ASA, chemically related to aspirin). Corticosteroids are very powerful and highly effective at inducing remission but have a high frequency of serious, potentially long-term side effects that result in its use being limited to that of a bridge between other therapies. 5-ASA is one of the oldest treatments used for IBD but is typically much more effective with ulcerative colitis rather than with Crohn’s disease. These medications are usually taken orally.

Immunomodulators include azathioprine, 6-mercaptopurine, methotrexate, and cyclosporine. These medications generally suppress the immune system and are frequently used in other situations where this is desirable, such as in chemotherapy or organ transplant. These medications can lead to very serious side effects and greatly increase a patient’s risk of infection and thus must be closely monitored. They are frequently taken either orally or by subcutaneous injection.

The most recently developed therapies used for IBD are the biologics, which are monoclonal antibodies that block specific targets within the immune system. By blocking these targets, overactive immune responses can be controlled. Side effects are similar to those experienced with the immunomodulators, but as these medications are more specifically targeted, they tend to occur less frequently.

One more recent biologic, vedolizumab, is the first to specifically target gut-specific inflammation rather than systemic (all-over) inflammation. These agents are generally given either as a subcutaneous injection or through intravenous administration in a hospital or infusion clinic.

Biologics tend to be the most effective in controlling both Crohn’s disease and ulcerative colitis, but they are very expensive (starting at thousands of dollars per dose) and the long-term effects (particularly for newer therapies) have not been fully characterized in contrast to the anti-inflammatory and immunomodulator medications that have been in use for decades.

Crohn’s disease and ulcerative colitis can be incredibly difficult to live with. Many patients will require a surgical intervention during their lifetime and children with IBD may experience developmental challenges (i.e., stunted growth) due to their nutritional deficiencies. Patients with IBD are at an increased risk of colorectal cancer (and potentially other cancers caused indirectly by their medications) and are more likely to have children with the disease compared to those without. Developing specific treatments that can eliminate or cure the disease have been hampered by the fact that a cause is still unknown and that many people experience their symptoms differently.

Thankfully, hope may be on the horizon. Organizations like Crohn’s & Colitis Canada and the Crohn’s & Colitis Foundation in the US continue to invest money into IBD research and the development of a cure. One day, these debilitating diseases could finally be limited to medical textbooks and not continue to result in the suffering of a growing percentage of the population.

Living with a Chronic Illness: My Challenges with Crohn’s Disease

Long-Term Use of PPIs and Risks