Sierra has a bachelor of science degree with a specialization in drug development and human toxicology, and is currently completing a PharmD. She also has a passion for ensuring patients have an in-depth understanding about their medications.

GERD is an uncomfortable, but unfortunately, very common condition. It’s often confused with acid reflux, but GERD is a more extreme form of this situation. Acid reflux refers to the occasional reflux of acid up from your stomach and back into your throat. This is bothersome, but not dangerous since it occurs rarely. The most common treatment for acid reflux is over the counter (OTC) antacids.

To learn about antacids read this blog on OTC drugs for acid reflux .

GERD, on the other hand, is a term used to describe reflux that happens more than twice per week for a significant amount of time. This then needs to be treated with lifestyle changes and often medication. This is because GERD can cause a lot of damage to your throat if left untreated. Your stomach has a thick mucus layer that protects the stomach from its own acidic contents. The throat does not have this, so when acid is refluxing up into the throat, this can actually cause a lot of damage to the throat tissue. Eventually, this can cause something called “erosive esophagitis”, a condition in which swallowing becomes uncomfortable due to the extent of damage.

How Can GERD be Treated?

There are many risk factors for developing GERD, some of which are avoidable by changing certain lifestyle habits. Avoiding GERD or changing your lifestyle as soon as you develop the condition, can help prevent further damage to your throat

Changing your diet is a great way to start reducing the amount of reflux you are experiencing. Fatty, acidic, and/or spicy foods as well as caffeine and alcohol are all known to exacerbate reflux symptoms. Avoiding these foods and drinks or consuming them in smaller quantities can greatly reduce the amount of GERD reflux you experience. Extending from this, there are also eating habits that can trigger GERD. Eating very large meals in one sitting or late at night can lead to more reflux. Trying to eat smaller meals more frequently puts less pressure on your stomach and thus reduces the amount coming back up your throat. In addition, the late time of day itself is not the issue with eating late at night, but rather the short span of time between eating and laying down for sleep. Gravity helps keep your food down where it's supposed to be, so when you lay down with a meal in your stomach, it’s much easier for it to come back up into your throat since your stomach and throat are now level. Making sure you remain upright for 30 minutes to 3 hours before bed is a great method to reduce your reflux at night.

Another major lifestyle alteration you can make is to quit smoking. Smoking leads to many negative health consequences, including the increased risk of developing GERD. This is because the smoke damages your throat and also potentially relaxes the muscle that is responsible for keeping food down. Ceasing smoking may or may not help treat your GERD, but it will absolutely prevent further damage from being done. It’s never too late to stop smoking!

The final lifestyle alteration that can reduce GERD symptoms is weight loss. Being obese is one of the greatest risk factors for developing GERD. This is because of the excess body weight pushing on your stomach and almost squeezing the acid back up into your throat. Losing weight and doing regular, non-intensive exercise can help improve your digestive system health and reduce GERD symptoms.

When lifestyle changes are not enough and GERD symptoms are persisting, medication is the next step. There are two main types of medications that are prescribed to treat GERD. These are proton pump inhibitors (PPIs) and histamine-2 receptor antagonists (H2RAs). Both medications work very well short-term, but PPIs seem to be more effective for longer-term treatment. However, PPIs do have risks associated with long-term use.

Learn about the health risks when taking PPIs long-term 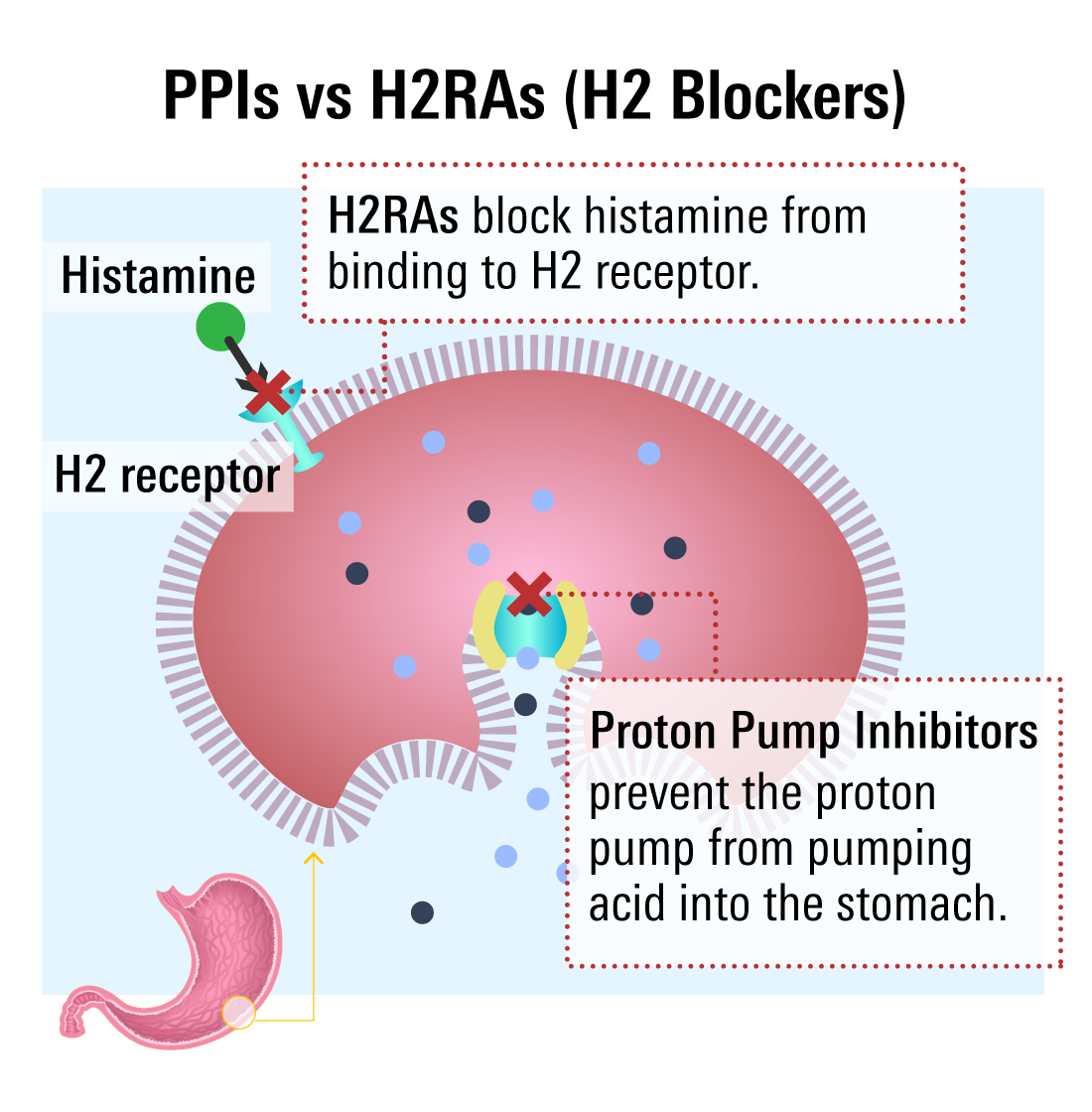 PPIs work by stopping the pump that usually releases acid into the stomach. This is very effective but takes a few days to start working, so it does not provide immediate relief but provides long-term efficacy. Examples of PPIs are pantoprazole, omeprazole, esomeprazole, and lansoprazole. Each of these medications works slightly differently and may have different uses, side effects, and contradictions.

PPIs are usually prescribed short-term for active GERD treatment, but this can be extended longer-term in order to treat erosive esophagitis or for longer-term maintenance therapy.

The other medication used to treat GERD are H2RAs, which work a step earlier in the acid-producing process. H2RAs bind to the receptor that is usually responsible for signalling to the stomach cells to make stomach acid. When H2RAs bind, no signal is able to be transmitted anymore and less stomach acid is released. Unlike PPIs, these work very quickly. However, in some people they can stop working after 1-7 days because of something called “tolerance”. Your body essentially “gets used to” the medication and starts making more acid to compensate. Examples of H2RAs are famotidine and cimetidine.

H2RAs also work slightly differently for different people, but in general have slightly fewer side effects and are contradicted in fewer people than PPIs.

There are some people that should not take PPIs or H2RAs, so it’s essential to discuss your medical history and full list of all medications, prescription and over the counter, with your healthcare provider when being prescribed either medication.

What is Peptic Ulcer Disease (PUD)? 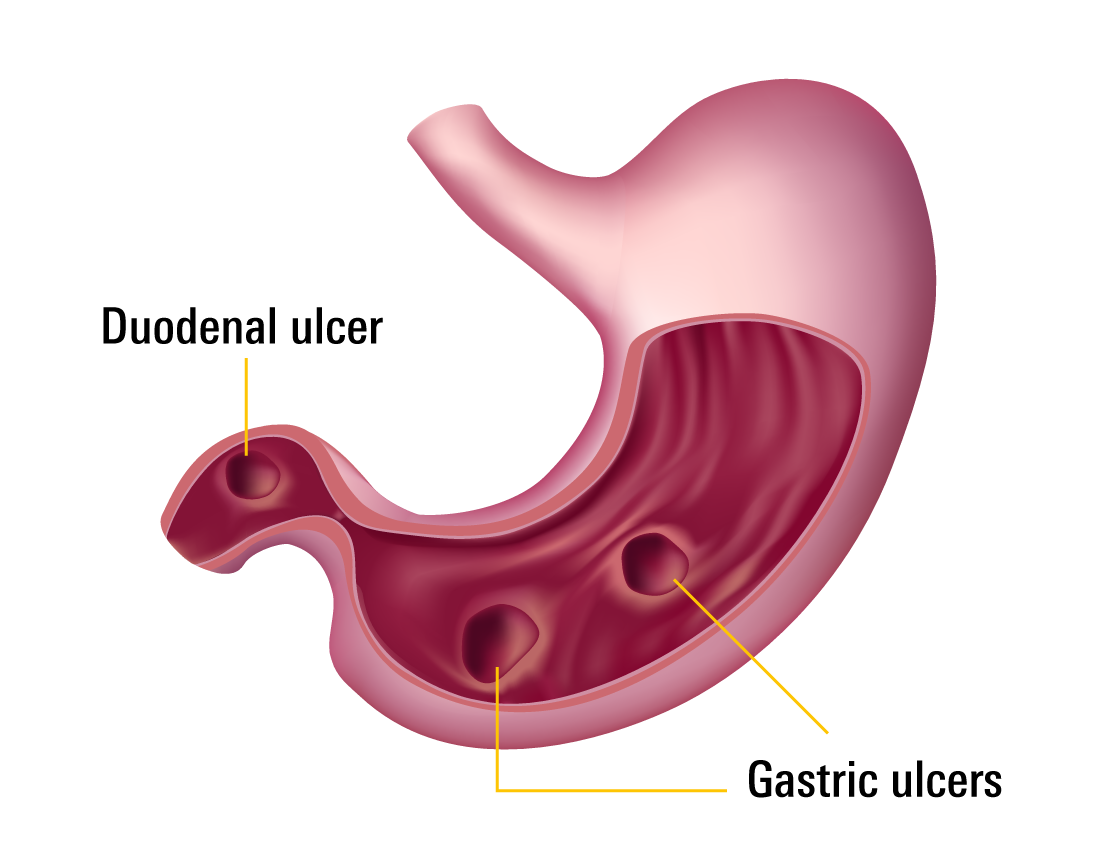 The liquid in your stomach is extremely acidic, slightly stronger than lemon juice and slightly weaker than battery acid. The only reason that this acid doesn’t burn your stomach is because both your stomach and duodenum have a thick layer of mucous covering the tissue underneath. This protects the tissue underneath from being seriously burned and damaged by the acid. When this mucus layer gets worn down, the acid then reaches the tissue below and this is what causes an ulcer. The constant presence of this acid also makes it very difficult for this ulcer to heal on its own.

What causes that mucus layer to get worn down? While many people think stress or eating spicy foods can cause ulcers, that is actually not true. There are two main mechanisms for ulcers to occur: a bacteria called Heliobacter pylori (H. pylori) or long-term, high doses of non-steroidal anti-inflammatory medications (NSAIDs) such as ibuprofen or naproxen. 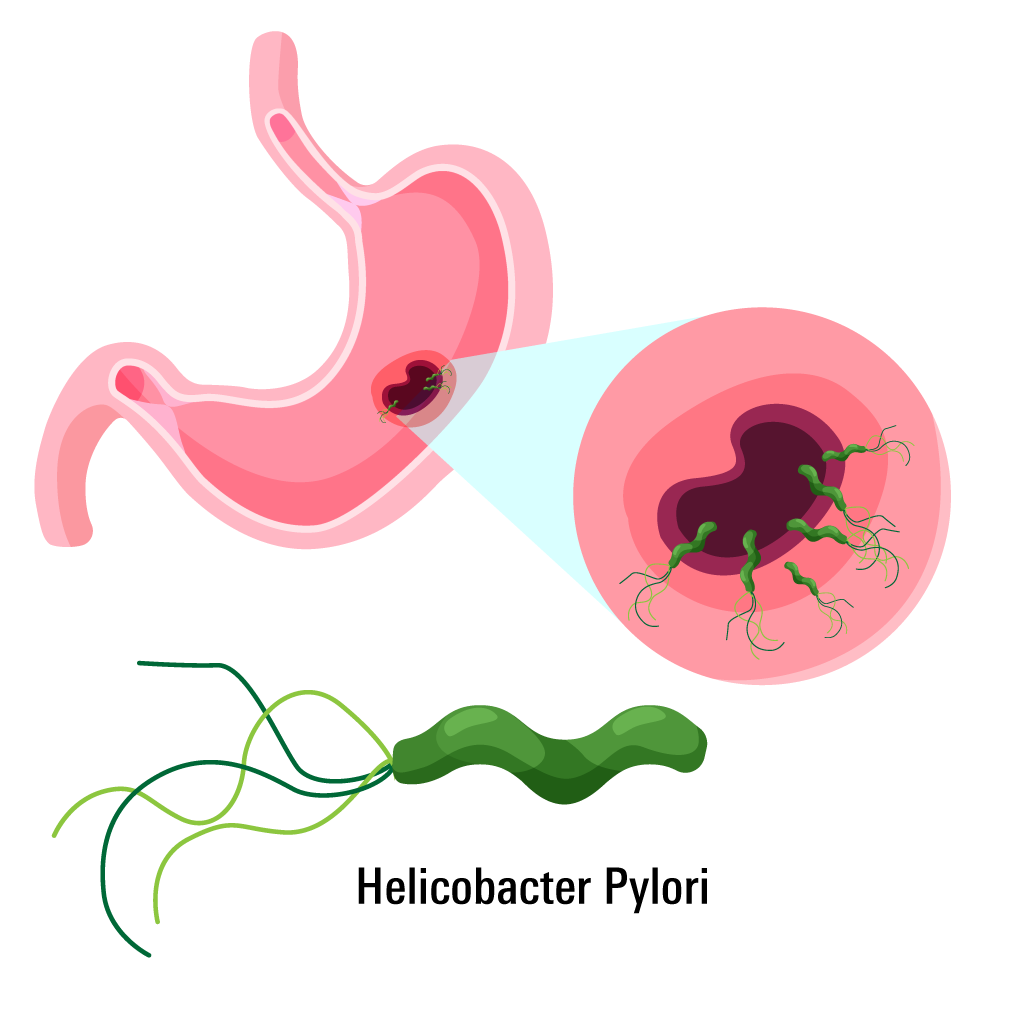 H. pylori is a type of bacteria that is actually able to survive in the acidic environment of your stomach. It does this by releasing chemicals that make the environment directly surrounding it less harsh. These bacteria also release chemicals that break down the mucus in the duodenum and stomach. Once they have broken down this mucus, the tissue below is then exposed to stomach acid, which burns and causes an ulcer. H. pylori ulcers are slightly more common in the duodenum than the stomach and are difficult to treat since getting rid of these bacteria can take a lot of time.

The other main cause of worn-down mucus is chronic NSAID use. The stronger the NSAID, the more likely these ulcers are to occur. High dose naproxen is a common cause of NSAID-related ulcers, since the doses tend to be high, and the medication is long acting. There are multiple reasons why NSAIDs lead to ulcers, but the main cause is once again the worn-down mucus layer. This is done by NSAIDs because of their direct irritation to the mucosa and because the chemicals in NSAIDs reduce something called “prostaglandins”. While reducing prostaglandins is very effective for treating inflammation and pain, it also leads to reduced protection of the mucus by those prostaglandins. In contrast to H. pylori ulcers, NSAID-related ulcers are actually more common in the stomach. They are also potentially more dangerous, since these ulcers are more likely to cause bleeding, which can be a medical emergency.

How to Treat Different Types of Ulcers

Ulcer treatment requires medication, however, there are ways to prevent ulcers before you get to the point where you require medication. Preventing ulcers is very important because once you’ve had an ulcer, you are more likely to develop more.

These risk factors are largely un-preventable, since most people without clean drinking water are not choosing to drink unclean water. However, it is still important to know situations that are more likely to cause H. pylori infections so we can potentially try to prevent these infections in those at the most risk.

The other method of prevention is to avoid long-term NSAID use. NSAIDs are very effective pain killers and have their place in treating pain and inflammation. However, it’s important to try to decrease the dose and length of time you are on NSAIDs in order to reduce the risk of developing a gastric ulcer. If it’s possible to treat the pain with another painkiller, such as acetaminophen, that is the best option. Many other painkillers do not have the same ulcer risks, and therefore taking these can be a great option. Importantly, acetaminophen is contradicted in those with liver disease, so there are many other things to consider when making this choice.

The other possibility, if NSAIDs are the best possible painkiller for you, is to be on concurrent therapy with ulcer-treating medications while you remain on NSAIDs. Many patients who are prescribed long-term NSAID treatment are also prescribed low doses of PPIs in order to treat/prevent the ulcer forming in the first place while you are on these potentially dangerous medications.

Medication Use in Treating Ulcers

Once you have developed an ulcer, the main treatment option is medication. The management is slightly different for NSAID-related and H. pylori-related ulcers since the underlying cause needs to be treated differently in each situation.

When treating an ulcer caused by H. pylori, you have to get rid of the bacteria causing the ulcer. To do this, you would be prescribed a combination of 2–3 antibiotics. The main antibiotics used are clarithromycin, amoxicillin, metronidazole, and/or possibly tetracycline. Along with a combination of these antibiotics, it’s also very important to be prescribed a PPI, such as esomeprazole. This will act to heal the ulcer, as it will reduce the amount of acid produced in your stomach and thus remove the acid burning that ulcer. The course of the antibiotics alongside a PPI is typically prescribed for 14 days, as this is long enough to both kill the bacteria and also heal the ulcer.

The treatment for NSAID-related ulcers is more straightforward than that of H. pylori. Firstly, the NSAID therapy should be stopped, at least temporarily. Other pain management can be prescribed to replace the NSAIDs until the ulcer is healed, or indefinitely. Then, a PPI should be prescribed in order to reduce the acid presence for long enough to allow the ulcer to heal. Instead of a PPI, it is also possible to be prescribed an H2RA for treating an NSAID-related ulcer.

What is Inflammatory Bowel Disease?

Living with a Chronic Illness: My Challenges with Crohn’s Disease