Drug costs can be inflated with pricing strategies from Pharmacy Benefit Managers (PBMs) who create additional hidden fees and use unethical pricing models that allow them to overcharge the health plans hundreds of millions of dollars each year.

How do they do this? PBMs are middlemen in the pharmaceutical pricing game. One of their roles is to negotiate “better pricing” for medications for health plans by communicating with the companies who make the medications. For this service, healthcare plans pay PBMs an administrative fee to find the best price, but most plans don’t realize that there are also hidden fees PBMs charge called spread pricing.

Spread pricing is the difference between a reimbursement for a prescription, paid by insurance companies, and payments for prescription medications, the money paid to pharmacies.

That difference is referred to as spread pricing, and that money goes straight into the PBMs pockets.

Recent reports have shown that PBMs in Ohio and Kentucky were overcharging state governments by hundreds of millions of dollars.

With PBMs playing the middlemen, they have the ability to overcharge health plans and inflate the price you pay for your prescriptions without anyone knowing. In the end, it’s the employers and taxpayers paying for these plans who are paying the price. Imagine what you could do with an extra $100 million in tax money for your community!

What is a Pass-Through Pricing Model?

Pass-through pricing is a model where PBMs pass on the same fees and discounts from the pharmacy to the plan sponsor.

Pass-through pricing is much simpler than the current and complicated spread pricing model used by most PBMs.

With pass-through pricing there is just a simple administrative fee charged by the PBM for negotiating better prices for medications. This restricts PBMs from adding on extra fees and completely cuts out the spread pricing which is a significant source of inflated prices in today’s healthcare system. 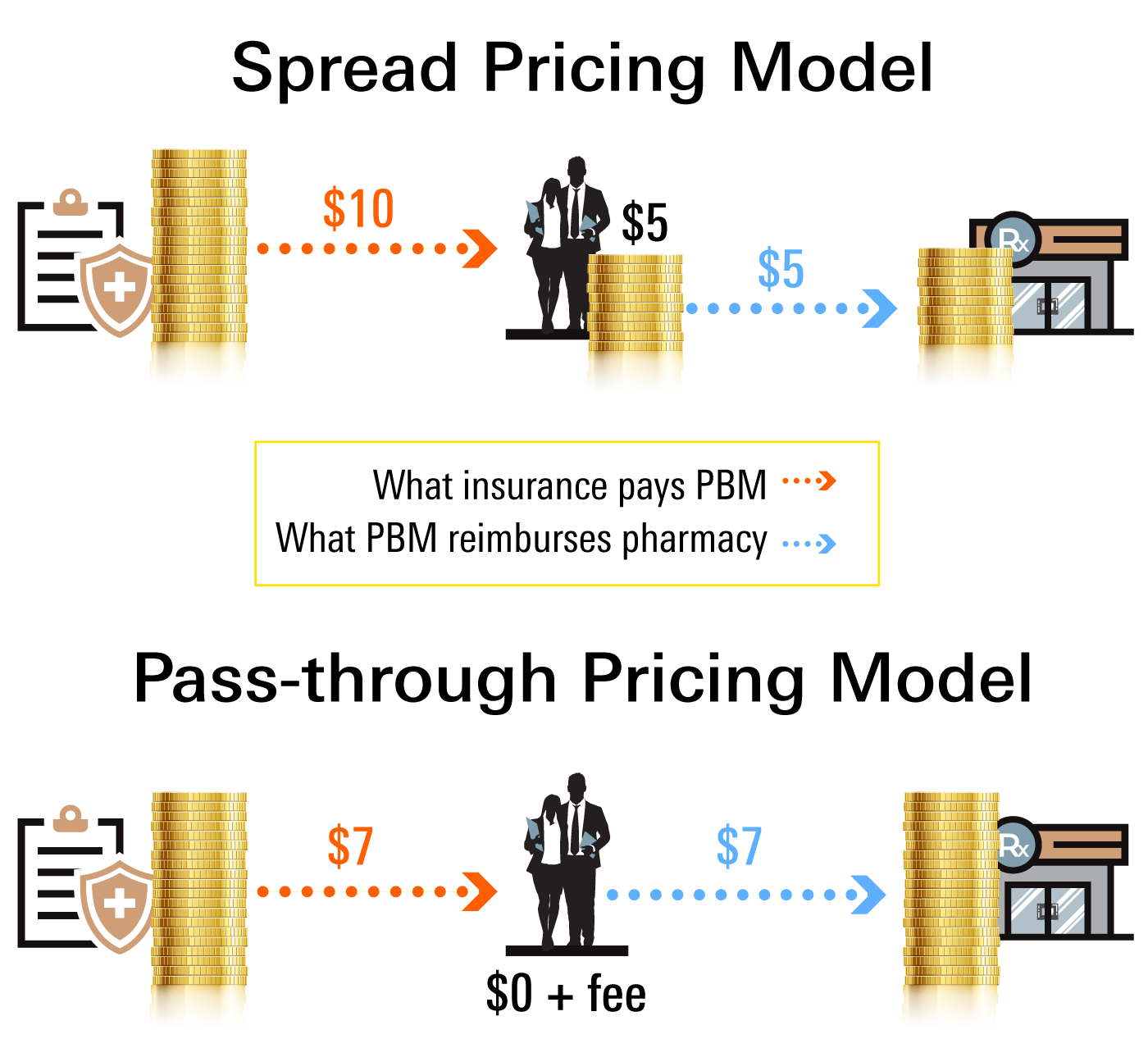 Some states have already adopted laws that restrict PBM spread pricing strategies, and many others have plans to introduce this.

Switching away from spread pricing to pass-through pricing will completely remove extra fees tacked on by PBMs. This will reduce the overall cost of prescription medications for employers, taxpayers, and patients.

Pass through pricing models also bring us closer to the original intention of PBMs, which was to help insurance companies and patients achieve better health outcomes by improving the appropriateness and affordability of medications.

Adoption of the pass-through model in the U.S. would be a major step forward in improving price transparency in the pharmaceutical industry.

How Drug Pricing Laws are Already Being Used

State laws restricting PBM pricing strategies have been adopted by states such as Georgia, Michigan, Mississippi, Ohio and Tennessee. Here’s some examples:

Unfortunately, the majority of U.S. States haven’t created rules and regulations on spread pricing and most government and employer health plans are overpaying for medications.

Pass Through Pricing Laws can Save us Millions in Taxpayer Dollars

You’ve got the opportunity to tell your state government how they can save millions of taxpayer dollars each year. If you want more laws that restrict drug price inflation, contact your local Governor’s office.

Introducing new state laws to regulate drug pricing games is a real step forward in reducing the cost of prescription medications and improving pricing transparency in the pharmaceutical industry. Plus, it will save us hundreds of millions in healthcare costs each year.

You can also support businesses like Marley Drug who are challenging the system with new pharmacy models that by-pass insurance.

Advantages of not having to pay via insurance:

At Marley Drug we offer a flat, transparent price. Through our Wholesale Price List we offer over 100 generic medications at just $37 for a 6-month supply, or $70 for a 12-month supply. This includes free shipping. That is only ~$6 a month!

Never going to pay through your high deductible? Save money by paying cash at Marley Drug

Refilling a prescription every 3 months can be a hassle! Learn about another way that will save you money