A guide to manage depression and bipolar disorder—know your options

Depression is one of the most common mental health conditions experienced worldwide. It can be debilitating and interfere with many aspects of day-to-day functioning: school, work, self-care, and interpersonal relationships.

Depression typically presents as a consistently low mood and lack of pleasure in activities you typically enjoy. It also includes a mix of different symptoms:

It is very important to speak with a healthcare provider if you are feeling this way.

It is critical to differentiate between the different forms of the mood disorder. While the symptoms of depression are similar for the various depressive conditions, the timeframe and timelines differ.

you experience a persistent low mood and disinterest in regular day-to-day activities. The low mood is severe and typically comes in episodes of at least two weeks. The episodes come and go, separated by periods of at least 2 months.

The symptoms are not as severe as MDD and do not come in waves. It is a persistent condition that exists at a low level at all times, for a period of at least 2 years.

is typically also diagnosed based on the time in which is is experienced. PPD is a period of depression that occurs after the birth of a new baby. It’s normal to feel a wide range of emotions after the birth of your child, but when this is a severely low mood and does not go away after a few weeks, it is often considered to be postpartum depression.

SAD is a form of depression that comes and goes based on the time of year and changing of the seasons. Fall-onset SAD is the most common and presents as decreased mood as the weather gets colder and it gets dark earlier in the day.

Read about Different Types of Depression

Depression can be managed by lifestyle changes, talk therapy, and/or medication management.

Talk therapy include IPT, which focuses on strengthening interpersonal relationships, as well as CBT, which focuses on recognizing thought patterns and changing resulting behaviours. Speak with your healthcare provider about which treatments are best for you.

There are five major classes of antidepressants, all of which have their differences; advantages and disadvantages. Learn more about the medications in each of these drug classes below: 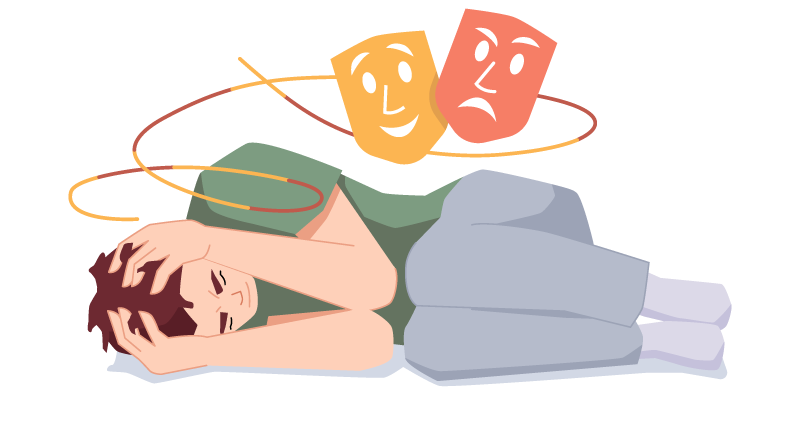 Bipolar disorder is another mood disorder but differs from depression in a number of ways.


Bipolar disorder is characterized by periods of extreme highs and/or lows in mood. The highs are classified as either “mania” or “hypomania”, and the lows are periods of depression.

Mania is described as a period with abnormally elevated mood, increased energy and activity, as well as the possible addition of psychotic symptoms (like disorganized speech and confused thinking), as well as a number of other possible symptoms. Hypomania is like a less intense and debilitating version of this, but without any psychotic symptoms.

Depressive episodes are typically similar to major depressive disorder. If you think you may be experiencing any of these symptoms, it is very important to speak with your healthcare provider as there are ways to help control the condition. For example, one of the main medications used to treat bipolar disorder is lithium.