Monica Amin joined the Marley Drug team in 2022, prior to which she held various roles in the pharmaceutical industry as a pharmacist. Monica holds a PharmD and is actively pursuing an MBA.
Sep 29, 2022

Beta-blockers have been around since the 1960s, but there are now a variety of beta-blockers on the market, with many of them being used to treat various conditions. If you struggle with arrhythmia (irregular heartbeat), angina (chest pain), heart failure, and/or tremors, then beta- blockers may be a suitable drug class for you.

Beta-blockers, also referred to as beta- adrenergic blocking agents, are a drug class of medications, generally ending in “-olol,” used to prevent your heart from being affected by epinephrine (adrenaline), and other stress hormones such as noradrenaline.

Your body uses adrenaline and noradrenaline to activate your “fight-or-flight” response, which is designed to keep you safe during threatening scenarios. You may experience rapid heartbeat, high blood pressure, excessive sweating, anxiety, and heart palpitations if your body produces high adrenaline levels.

By hindering the release of these hormones, beta-blockers reduce the stress placed on your heart and the force of heart muscle contractions. As a result, the blood vessels in your heart, brain, and the rest of your body are relieved of that pressure. 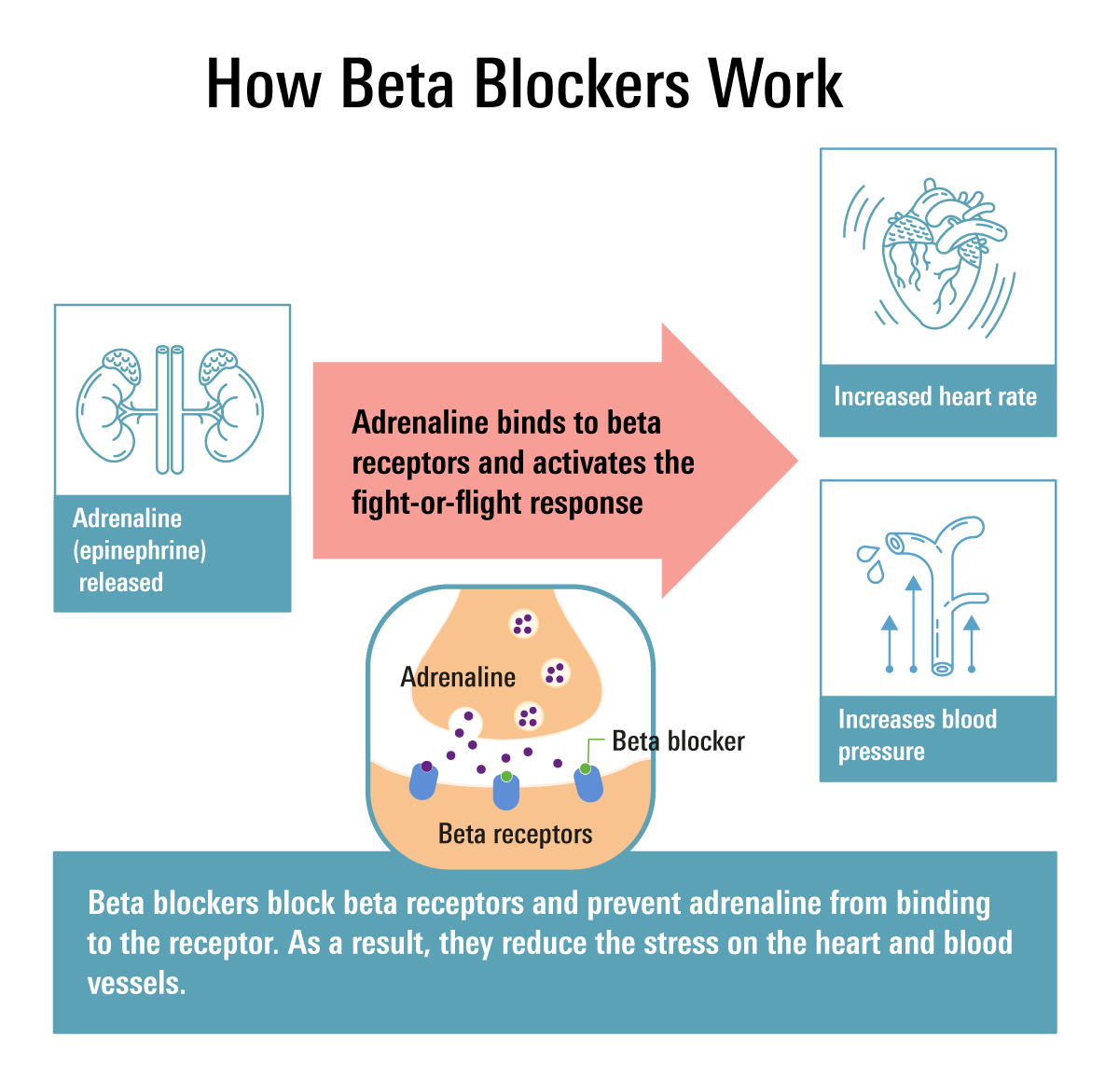 How do Beta-Blockers Work?

Nerves across your body, as well as your adrenal gland (a small gland that produces steroid hormones), create norepinephrine and epinephrine. These hormones help control heart rate, blood pressure, and other important body functions. They work as neurotransmitters, which are chemicals used by nerves to communicate with one another. Your body has both alpha and beta receptors.

Beta-blockers differ by which receptors are blocked. Examples of beta receptors include:

Some medications in this drug class have alpha-1 blocking properties, such as Carvedilol and Labetalol, that decrease peripheral vasoconstriction, which is another mechanism used to lower your blood pressure.

Beta-blockers block the effects of catecholamines (a neurohormone that’s made by nerve cells and used to send signals to other cells), especially norepinephrine, at the beta-1 and beta-2 adrenergic receptors. This results in vasodilation (widening of blood vessels), improving your cardiac function, and improving your medical condition. For this reason, beta-blockers are recommended for all individuals with heart failure.

What are Beta-Blockers Used For?

Beta-blockers are primarily used to treat cardiovascular problems. These medications were previously used for hypertension (high blood pressure) treatment, however, are no longer recommended as a first-line treatment option for uncontrolled hypertension unless an individual has a comorbid condition for which beta-blockers are recommended, such as a previous heart attack, stable ischemic heart disease (SIHD), and/or heart failure, or if other medications, such as diuretics, haven't worked well.

Beta-blockers are commonly used to treat and/or prevent:

Beta-blockers are also used as off-label (used for a medical condition that it is not approved to treat) medications in these conditions:

Beta-blockers are divided into two categories: Selective and Non-selective.

These beta-blockers are generally safe to use if you have diabetes because their activity is more specific/selective. They aren't a common therapeutic option for anxiety.

What are the Side Effects of Beta-Blockers?

Common adverse effects of these medications include:

What Should I Look Out For When Taking a Beta-Blocker?

Beta-blockers have a black box warning (the strictest warnings for prescriptions) that warns against abruptly discontinuing your beta-blocker because that may increase your risk of a heart attack or other heart problems.

Beta-blockers should be gradually tapered off (gradually decrease the dose) over 1–2 weeks to avoid serious side effects, such as acute tachycardia (sudden onset of a rapid heartbeat), hypertension (high blood pressure), and/or ischemia (deficient blood supply to parts of your body).

Individuals with diabetes should use beta-blockers with caution because they have been shown to potentially worsen hypoglycemia (low blood sugar) and hyperglycemia (high blood glucose) and mask hypoglycemia symptoms, such as rapid heartbeat.

Individuals with bronchospastic disease, such as asthma or chronic obstructive pulmonary disease (COPD—a chronic inflammatory lung disease that causes blocked airflow from your lungs), should use beta-blockers with caution because they have been shown to trigger severe asthma attacks.

For many illnesses, beta-blockers are the first-line treatment. Beta-blockers have especially helped many individuals with heart failure live a longer and healthier life.

Talk to your healthcare provider about using beta-blockers and send your prescription to Marley Drug. Save up to 95% compared to your local pharmacy by using Marley Drug